A tale of an indigestible meal, a royal standoff, a famous royal mistress and a rough seduction.  And this insignificant little ruin is all that’s left to tell the tale.

The ups and downs of medieval baronial life in the Welsh Marches. 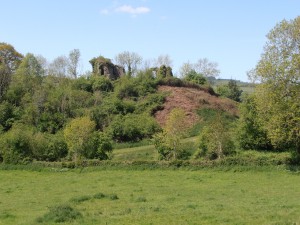 This post was inspired by my journey to and from Hay Festival in 2012, through the village of Clifford.  It is a journey I have done many times, but the weather was glorious and the hedgerows full of flowers,  The ruins of this little castle looked idyllic which led me on to write about it …

The ruins of Clifford Castle in Herefordshire, on the banks of the River Wye just on the English side of the border with Wales, some three miles from Hay on Wye, occupy a lovely spot on a warm afternoon in June.  There is very little to see of the overgrown stonework, but what we know and what still exists suggests some definite clashes of personality – some romantic, some much less so – to have taken place there over the years.

Clifford Castle was built by Earl William Fitz-Osbern in 1069-70 on a natural outcrop overlooking a ford in the river (hence Cliff Ford).  With some ground work and a ditch dug, it became the motte that can still be seen from the road.

The castle passed into the hands of Ralph de Tosny.  Originally simply a small motte and bailey,  by the 13th  century it had become a stone keep with a hall and 5 D-shaped towers.  This is the remains of one of them. 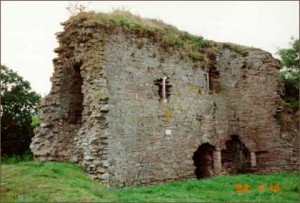 With the wars of Stephen and Matilda the Tosny’s hold on Clifford castle weakened.  Roger Tosny’s steward, Walter Fitz Richard, had taken the name Walter de Clifford, had married Isabel Tosny, Roger’s sister, and by the end of the civil war he had made himself de facto lord of Clifford.  With an eye to the main chance, Walter refused to return the castle and lordship to their rightful owners, and also saw the advantage of having a beautiful daughter.  Walter was clearly a man with ambitions.

During the reign of King Henry II, Walter Clifford – a pragmatic man as well as an ambitious one –  introduced his daughter, renowned for her beauty, to Henry when he was campaigning in Wales.  Soon the two became lovers and Walter’s seductive daughter ensured that Walter never lost control of Clifford.  This lovely young woman is of course Rosamund, the ‘Fair Rosamund’ of myth and legend. It is said that Henry placed Rosamund in a safe house at the centre of a maze at Woodstock in Oxfordshire. The centre could only be found by following an almost invisible silver thread.  However, Henry’s wife Queen Eleanor found the thread and, finding the fair maiden, Eleanor forced her to drink fatal poison.  Another excellent historical myth, I expect.  Whatever the truth of her end, this little castle in the Marches is where Fair Rosamund grew up.

Now for the unpleasnt ‘snack.’  The main building project at Clifford was complete by the reign of King Henry III who ordered a later Walter de Clifford to pay off the large debts he owned to the Jews as a result of the expense of these new works.  When Henry sent his demand, a furious Walter rebelled.  The story says that he made the royal messenger ‘eate the King’s Writ, Waxe and all’.  A scene that certainly fires the imagination and certainly resulted in severe indigestion.  Royal seals were not small.  King Henry suitably incensed by this flagrant disobedience sent an army to besiege and capture the castle from Walter – who wisely saw it in his interests to surrender without a fight.

This is a somewhat romantic view of the ruins of Clifford from the River Wye.  Today it is certainly not as impressive as this. 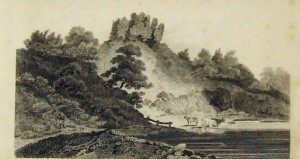 And here is another gem of history at Clifford – the tale of a rough wooing.  On Walter’s death in 1262 the castle passed to Matilda de Clifford, Walter’s daughter and widow of William Longspey, Earl of Salisbury.  This lady was abducted and forcibly married to John Giffard of Brimpsfield.  In terror she managed to get a letter to the king telling of her abduction and rape, pleading for rescue. Once more Henry III took to the field, this time for the honour of the baroness of Clifford. However before he reached Clifford he received another letter from Matilda saying that everything was quite satisfactory now, and she had married her abductor.  Resuce was no longer on the cards.

This enterprising gentleman was fined for this vicious exploit against the lady, but Matilda opted to remain with him as his wife.  Did Matilda fall for her abductor?  Was it a more exciting life for her as his wife than as a widow?  We will never know the answer, but somewhere in there is a great story.  The marriage was subsequently blessed by the birth of two daughters before Matilda’s death in 1284.

In the 14th century the castle passed into the hands of the Mortimers of Wigmore.  It is said that they entertained Richard II and John of Gaunt at Clifford Castle in 1381, before the Peasants’ Revolt and the destruction of Gaunt’s magnificent Savoy Palace.  At this point in Gaunt’s history with Katherine Swynford, he had not yet publically disowned her and she would still have been his mistress, but I doubt she was with him at Clifford.

Clifford played little part in subsequent history apart from being garrisoned against the Welsh in 1403 in the Owain Glyn Dwr uprising.  It eventually fell into disuse. 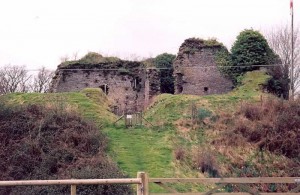 Today, as this shows, there is little to see except the large over-grown motte on the south bank of the River Wye, some poor remnants of wall structures and the remains of the great gatehouse.  It is on private property and so cannot be visited by the hopeful tourist, but recently it was on the market for sale, and unlike Wigmore Castle, it has a house for the lucky owner, as well as a stretch of the River Wye and fishing rights.  The house is more of a Victorian villa than a house of historic  construction, but how splendid to have a castle in your own back garden. 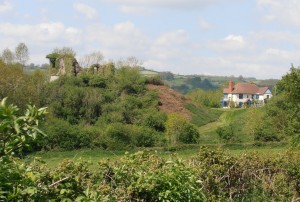 Finally a lovely view of Clifford – both castle and house – in the June sunshine this year, but I doubt that life was ever very attractive there in the bleak winter months (although Matilda de Clifford obviously had no desire to escape from it!)

Perhaps some day there will be the opportunity to incorporate a flavour of these events in one of my novels.  I used Matilda in a romance written some years ago.  Who knows if the rest will feature?

8 responses to “The remarkable history of Clifford Castle”