The Queen’s Choice is available in Hardback and eBook in the UK on 14th January 2016, and in paperback in May 2016 in the UK and Australia.

France, 1399:  The Duke of Brittany is dead and his widow, Joanna of Navarre, has inherited control of their land – a testament to her intellect, integrity and political prowess.

Then comes an unprecedented proposal from Henry IV, King of England.  The price of becoming his Queen? Abandoning her homeland, leaving her children and sacrificing her independence.

Henry’s hold on the crown is unsteady and war is brewing. With the constant threat of rebellion, Henry will trust no-one – not even his new Queen. Crossing the channel is a dangerous prospect. But the union between Joanna and Henry would bring the chance of a vital alliance between two proud states – if they will allow it.

One question. Two paths. A choice that will make history.

'O’Brien cleverly intertwines the personal and political in this enjoyable, gripping tale'

"Anne O’Brien, the much-loved historical novelist who breathes new life into forgotten medieval women, is back to enchant and enthral us with a torrid tale of love, sacrifice and rebellion at the volatile court of King Henry IV…

Packed with drama, danger, romance and history, The Queen’s Choice is the perfect reading choice for the long winter nights."

‘Joanna of Navarre is the feisty heroine in Anne O’Brien’s fast-paced historical novel The Queen’s Choice.’

‘A gripping story of love, heartache and political intrigue.’

"...packed with powerful emotions and tumultuous unfolding of an affair that changed the course of royal history, this is a novel in which to enjoy the past in all it rich colour and dramatic detail..."

'Anne O'Brien is a terrific storyteller'

'Historical fiction at its best'

'brimming with history, passion and drama.' 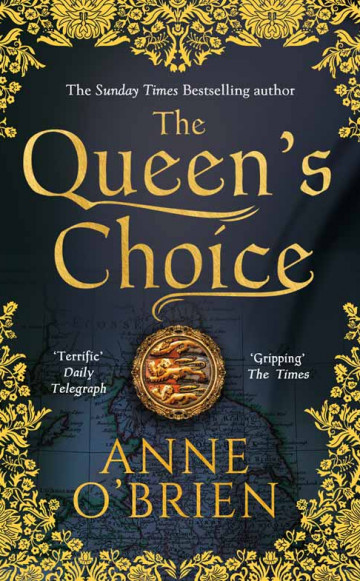 A story of choices.
Of love and heartbreak.
Of witchcraft in royal circles.