A moving cry from a 12th century heart.

Why did medieval women join convents?  This is a subject well documented, and needs no insightful additions from me. 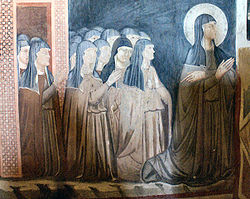 Some without doubt became nuns through a deep seated vocation, a high ideal: women such as Hildegard of Bingen.

Others acquired a calling during their enclosed lifetime, as did Heloise who devoted herself to her new life after the tragic consequences of her relationship with Abelard.

But for others, the religious content of life behind walls may have played a less important part.

It was the custom of many noble families to be engaged in the endowment and patronage of nunneries, with one of the family being appointed the Superior of that convent.  For them it was a  career, allowing social standing without a husband, and with much to be enjoyed if Chaucer’s Prioress, with her little dogs, her ultra-nice manners, her Amor Vincit Omnia brooch and her coral rosary, is any guide.  I am sure many were exemplary nuns, but it is the Prioress who sticks in my mind. 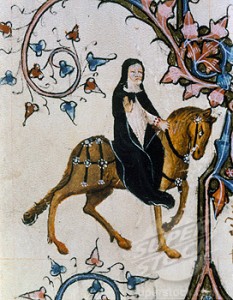 Then there were widows who chose a religious house as a refuge from worldly pressures, particularly if they were in financial difficulties.  And what better life was there, offering a dignified, respectable option, for women of social standing and wealth who did not or could not wed.

Nunneries were often the answer for superfluous daughters, girls being placed there at an early age, educated there, then making the transition to becoming a nun, the only life they had known.  There were not always happy consequences.  At the Gilbertine monastic house at Watton in Yorkshire in 1166 a young nun, placed there at the age of four years, grew up with no releigious conviction and was discovered, in maturity, to be pregnant.  The nun suffered either a miscarriage or an abortion – the comment was that God annulled the pregnancy.  Her lover, a lay brother, was castrated by her fellow nuns.  A tragic story altogether. 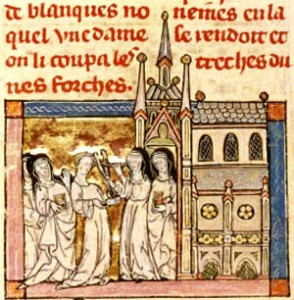 I am sure that many girls taking the veil simply bowed to the inevitable because there was little choice for them and life within the convent was better than life outside.

My reason for posting these thoughts on the inmates of nunneries came from my browsing through a book of medieval poetry.  There I came across these two stanzas from the Carmina Burana, a 12th century collection of Latin poems, some 250 in all.  They were written by wandering scholars, often concerned with volatile love, the pleasures of wine or with the exposing of abuse in the church.  The authors are anonymous. 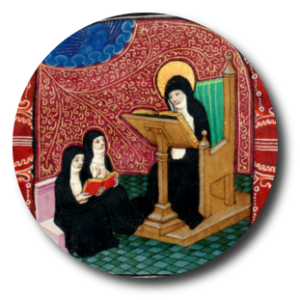 Here is The Nun’s Complaint.  What a sad little tale it tells.  How authentic is it?  How much truth does it offer as a tiny window into the hearts and minds of many women shut away from the world?  Quite a lot, I imagine.

What tears the sister shed,

Wailing the life she led:

Sighing she shook her head;

Then to the nuns she said:

‘What joys I miss.

There is no life on earth

So hard as this,

For I’ve a wanton heart,

I want a kiss.

‘The echoing bells I sound,

I chant the whole year round,

In sleep I’d fain be drowned,

But still no sleep is found.

What joys I miss.

I toss and awake.

Rather inside my arms

The main difficulty with it is that the author of these verses is most probably a man.  If so then the sentiments could well be accused of being the typical male comment on a woman needing a man in her life to make her feel fulfilled.  Shut away from the world of men, how was it possible for a nun to feel any sense of satisfaction or enjoyment of her lot?  Did the author actually know the emotions of many nuns, or is it a 12th century macho presumption?

But that apart, I imagine many a nun through the ages, who had taken vows for reasons other than religious conviction, would echo this Cri de Coeur against the restrictions on her life.

This simply little poem, kindly translated from the Latin by Jack Lindsay, touched my heart far more deeply than any description of the povery and privations experienced by many women who took the veil. 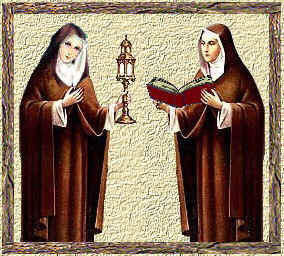 If you were as moved by this as I was, and wish to comment, I am always interested to hear from readers.