In 1400 Alice Perrers died alone, forgotten and buried under a storm of legal litigation. Was her rule as King’s Concubine all for nothing?

Alice Perrers died in Upminster in the late summer of 1400, alone, forgotten and frustrated by a deluge of legal litigation.  Her husband William de Windsor had died in 1384 and her children were grown and moved away with households of their own.  She had no place at the royal court.  To most of her contemporaries she was nothing but a distant name.  Her days as a woman of power and influence were long gone.  Many would doubtless say that she deserved everything she got for her ruthless avarice and immoral past in seducing Edward III and being the cause of such grief for Queen Philippa.

In his will Windsor left his property to his three sisters.  When his debts were cleared it was uncertain that there would be much left for anyone to inehrit.  Alice, understandably furious, because much of this property was hers, held in Windsor’s name as her husband, attempted to put in place litigation to recover it.  To no avail.  Even her own remaining properties, acknowledged as hers in her own name, came under atttack to help pay off Windsor’s debts.

Yet in spite of her complaints, Alice’s own will showed that she was still a moderately wealthy woman.   She left her remaining land and houses to her daughters: Joan who had married Robert Skerne, a lawyer, and Jane, wed to Richard Northland whose origins and career remain very uncertain.  Alice left money to be spent on repair of the roads around Upminster and a bequest for money to be distributed to the poor on the day of her funeral, as well as gifts for her servants.  She showed more generosity in death than was evident in her life.

Alice was buried in the parish church at Upminster.  Typically Alice, intending to leave a lasting memorial, she left the sale of one of her best oxen to pay for her grave as well as money for grave ornaments, to pay the chaplain and sacristan, and for candles to be burned around her grave in perpetuity.  Perhaps she considered that she needed God’s grace at the last. 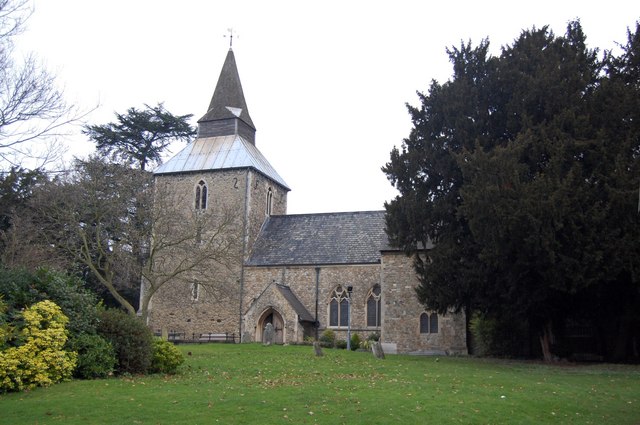 This is the church at Upminster where Alice was buried.  Sadly Alice’s desire for everlasting recognition was never realised.  St Laurence’s Church suffered much damage during the Cromwellian period and much reconstruction in the 19th century.  Today there is no evidence of Alice there.  Also her much loved home at Gaines in Upminster no longer remains.  Today a Victorian house built in 1870 stands on the site.  There is no evidence that Alice ever existed.  There is no lasting memorial to her.  Even by 1400 there was little memory of her.

As for her famous jewellery …

It appears that Alice was forced to raise cash to pay for her court cases by pawning them to William de Wykeham in return for a loan.  When she tried to claim them back, Wykeham turned traitor and denied that he had ever loaned Alice money or received jewels from her as security.  Because Wykeham was one of the judges as well as the defendent in the case, Alice lost her claim and her jewels.   I am sure that she was appalled that Wykeham, whose reconciliation with King Edward she arranged in the last months of Edward’s life, should turn against her.  But perhaps, again, we do not know the whole story.

But perhaps that is not the end of the Alice’s jewels.  This is a (poor!) representation of a funeral brass in the church at Kingston upon Thames.  But it is clear enough to see some interesting evidence …

It is a memorial brass for Joan and Robert Skerne.  And Joan, Alice’s daughter, is wearing some remarkable jewellery.  Two large clasps or brooches to hold the fastening of her cloak, and a large jewel suspended on a chain around her neck.

Was this the quality of jewellery usually worn by the wife of a provincial lawyer?  I doubt it.  But perhaps it was to be expected, if she was the daughter of Alice Perrers, one time King’s Concubine.  Perhaps this is exactly the extravagant decoration that Joan Skerne would be wearing.

I do hope so.  I hope that Joan and Jane both received items from Alice’s collection of jewels, items that had once belonged to Queen Philippa, and I would like to think that they thoroughly enjoyed wearing them.