Brilliana, Lady Harley, was a seventeenth century heroine in the English Civil War who, in the absence of the men of her family, defended her husband’s castle at Brampton Bryan from Royalist forces.

In 2005 I wrote a romance, Marriage Under Siege, based loosely on the brave life of Lady Brilliana Harley who held the siege of Brampton Bryan against the Royalists in the name of her Parliamentarian husband, Sir Robert Harley.  My romance could not be an accurate description of her life because, since it is a romance, I needed my heroine to live to the end of the siege to tell the tale, and I also needed my hero to spend more time with her than Sir Robert spent with Brilliana (he was in London during the whole of the event!), but much of the history of this woman’s remarkable life is included.

Lady Brilliana Harley’s fame rose from her defence of Brampton Bryan Castle in Herefordshire during the English Civil War.  A modest, self-effacing woman, pious and with a strong sense of duty, she devoted herself to the preservation of her absent husband’s interests and property.  In doing so she became a true wartime heroine, her death being mourned by friend and foe alike for her courage under great adversity.  Reluctant to take on her martial role, she determined to play it, and play it she did, with honour and to the death.

How do we know so much about her?

Brilliana was a letter-writer.  We have about 400 letters that she wrote to her husband and to her eldest son, Ned.  What a priceless gift they are to anyone studying the role of women in these Civil War years.  Sadly we have no replies to her letters.  Perhaps she destroyed them all as she read them, to prevent them falling into enemy hands.  But who’s to say that some will not turn up in some dusty archive one day … 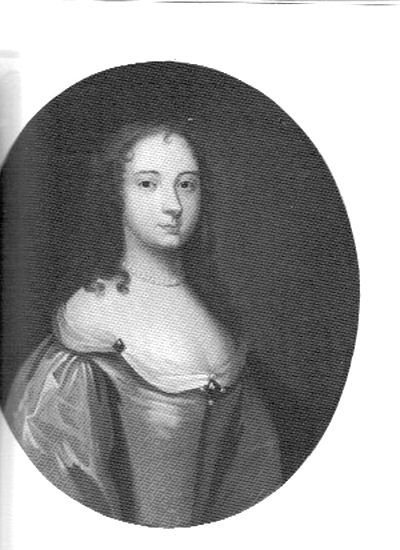 Brilliana was born in 1600 in Brill – hence her unusual name – where her father was Lieutenant Governor of the Netherlands.  She married Sir Robert Harley as his third wife, enjoying great love and tenderness with him.  They had seven children.  She was well educated, knowing both French and Latin, but was, as most women of her class, destined to fulfil a domestic role.  That is until the outbreak of the English Civil War, when Sir Robert sided with Parliament in a predominantly Royalist Herefordshire.   As with many divided families, the Harleys knew terrible anguish in holding fast to their political and religious views.  Brilliana herself had a number of Royalist relations.  We can only imagine the heartbreak this must have caused, within the family and between Brilliana and her powerful neighbours.

Brilliana’s maternal affection is a matter for comment.  Centred on her eldest son Ned, she wrote frequently to him when he was at Oxford University.  She sent him ‘liquorice’ for his cold and ‘eye water’ for sore eyes.  She sent her husband veal pies and shoes when he was in London as MP.  Her letters are full of detail of daily life and of love.  As she wrote to Sir Robert: ‘I pray you remember that I reckon the days you are away.’  And later:  ‘Believe me, I think I never missed you more than now I do, or else I have forgot what is past.’  How sad that they should spend so long apart.

This is an eighteenth centruy illustration of ruined Brampton Bryan Castle, making it look like a romantic memento of the past rather than the scene of a bloody struggle.

Throughout the war sir Robert was in London which left Brilliana to administer the castle.  When it was demanded that she hand it over to Royalist forces, she refused without compunction.  As a result she found herself under siege by Royalist troops.

It was a time of great danger and anxiety.  Even when Sir Robert – still in London, and remaining there throughout the siege – ordered his wife to leave for her own safety, she refused.  It was her duty, she said, to uphold her husband’s rights in the county.  From her letters we know so much detail of what went on in her daily life.  Her sheep and cattle were plundered.  Ditches and fortifications were dug in her gardens.  Troops took over town and church, making it easy to bombard the castle from the church tower.  We know that she sent a ‘roguish boy’, one of her servants, to London with a letter to get rid of him in case he joined the Royalists and betrayed them.  Brilliana sent her silver plate to London for safety, in a trunk marked as ‘cake.’  We know that some precious Venetian  glasses were smashed.  How she must have grieved, even over something so trivial.  When the Royalsits stole her bells from the church tower during what should have been a cessation of arms, Brilliana was quick to order a repulse.  ‘We sent some of his Majesty’s good subjects to old Nick for their sacrilege,’ she wrote.

The castle was ultimately destroyed.  This is as it is today. 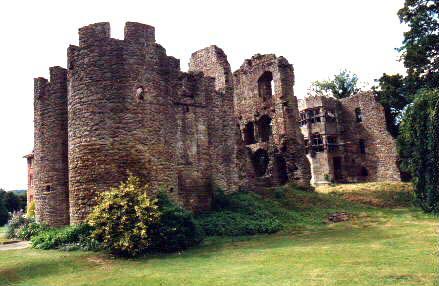 Brilliana presented difficulties for the Royalsits who besieged her because they were  reluctant to treat her, a woman alone, too harshly, but she refued to surrender.  When a parley was suggested, she allowed Royalist Sir John Scudamore to enter the castle by means of a rope ladder.  She would not open her gates, nor would she meet with him in person, even if she read his letter.  Even when a personal letter from King Charles was delivered to her, demanding that she surrender, Brilliana was not to be moved.  Although relief finally arrived for her and the siege was lifted, Royalist forces again menaced her safety and she found herself once more under threat.

The privations of the siege had their tragic effect.  Brilliana was never very strong, and she became weaker.  In October of 1643 she died on 4th day of an illness described as ‘a great cold, an apoplexy and defluxion of the lungs.’  Brilliana ‘looked death in the face without dread.’

Early in 1644 Brampton Bryan surrendered.  Brilliana’s younger children, baby Tom and his little sisters Dorothy and Margaret, 11 and 13, were taken into custody but were well treated by the Governor of Ludlow Castle. 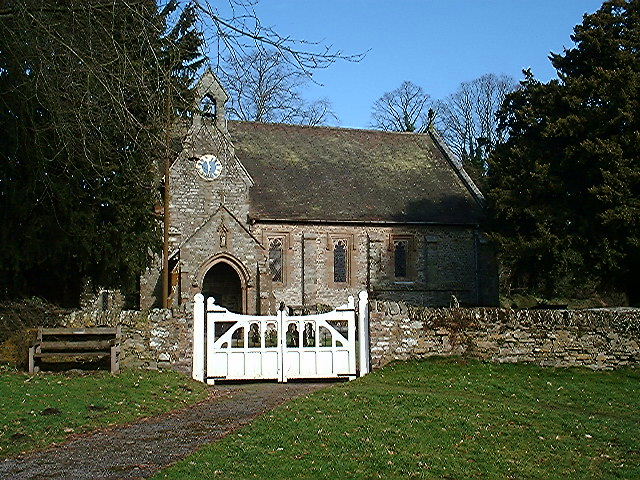 Brampton Bryan Castle was ‘utterly ruined.’  So was the church.  The whole area around was laid waste, but the Harleys returned.  The Church was rebuilt, as shown above – one of the few ‘Commonwealth’ churches built during the Interregnum, to exist in England.  The Castle was deliberately left in ruin – and remains so today – but a Harley mansion was built next to it.  It is still in Harley hands, but it is not generally open to the public.  When it is, the guided tour is given by a direct descendent of Sir Robert and Lady Brilliana Harley.  A very nice thought.

This shows the wall that surrounds the later house and the church, covered with a magnificent yew hedge, looking very much like a dragon’s back.  It must be a work of art to keep it clipped to this standard.  I doubt it was there in Brilliana’s day. 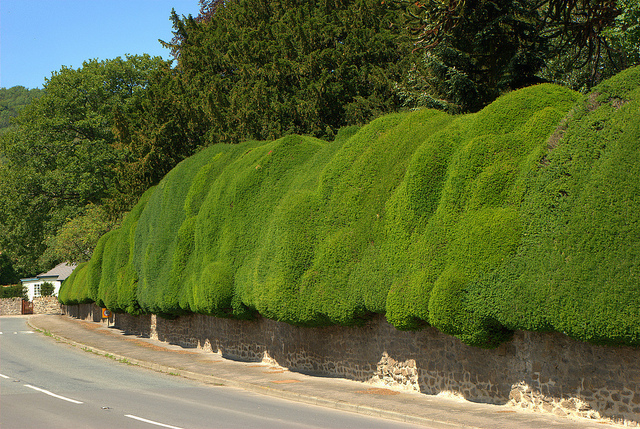 Brilliana was a courageous woman who stepped out of the role which she presumed would be hers and which she certainly enjoyed – that of mother and wife.  She deserves that history gives more than a nod to her contribution.  She is also remembered through her grandson, the great Tory politician of Queen Anne’s reign, Sir Robert Harley.  For herself she showed the lengths to which a very feminine, non-militant woman could be driven when faced with the demands of duty and principle, and a besieging army.  She was a remarkable heroine, and a splendid addition to the list of those seventeenth century women who faced military might alone. 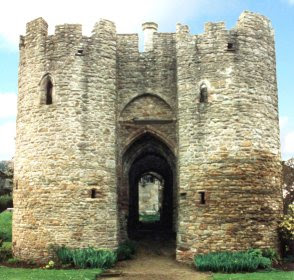 This is the gateway to Brampton Bryan that Brilliana kept securely closed against her Royalist attackers.