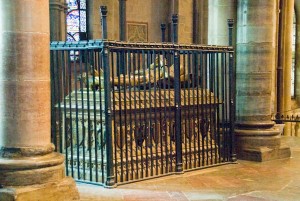 Edward’s title, the Black Prince, frequently used in history, was not found in evidence until the Tudor period, and so it would be wrong to use it to assess either his character or his reputation.  The reasoning behind such a title is obscure, and will remain so.  Was it attributed to his black armour?  No, since his armour would not be black when burnished for battle.  Was it a later comment on his autocratic temper, or even an example of presumed French propaganda, painting him black as their most notable enemy?  There is no evidence of either of these. 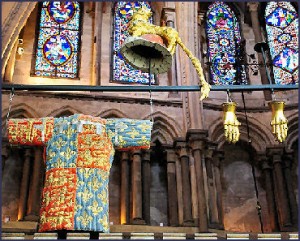 The epitaph on the Prince’s tomb in Canterbury Cathedral is strikingly lacking in either arrogance or autocratic pride, but portrays him as a ‘caitiff’, a man worthy of contempt.  It is not an original composition but was based on an anonymous 13th Century French translation of the Clericalis Disciplina written in Latin by Petrus Alphonsi who was physician to Henry I.  On the tomb it is written in French, but is here translated by the antiquary J Weever in : Ancient Funerall Monuments, 1631.

Who so thou be that passeth by,

Where these corps entombed lie:

Understand what I shall say

As at this time speak I may.

Such as thou art, some time was I,

Such as I am , such shalt thou be.

I little thought on the hour of death

So long as I enjoyed breath.

Great riches here I did possess

Whereof I made great nobleness.

I had gold, silver, wardrobes and

But now a caitiff poor am I

Deep in the ground, lo here I lie

My beauty great is all quite gone,

My flesh is wasted to the bone.

My house is narrow now and throng,

Nothing but Truth comes from my tongue:

And if ye should see me this day

I do not think but ye would say

That I had never been a man;

So much altered now I am

For God’s sake pray to the heavenly King

That he my soul to heaven would bring,

All they that pray and make accord

For me until my God and Lord:

God place him in his Paradise,

Here Edward, Prince of Wales, wretched caitiff, lies for all time, as a supplicant for human prayers and divine mercy.

Death levels us all, even a magnificent Plantagenet prince. 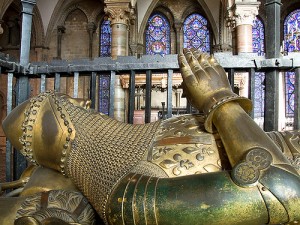