This is a painting of Duke Arthur III of Brittany, painted by the French artist Henriette Lorimier and exhibited in the Paris Salon of 1806 when Romanticism was the order of the day. 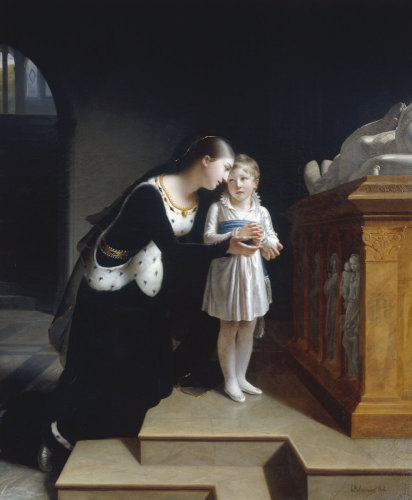 It is of interest to me because it is one of the few representations we have of Joanna of Navarre, second wife of King Henry IV of England.  It shows her, beside the tomb of her late husband Duke John V of Brittany, in the role of caring mother, instructing her young son in the need for piety, in the importance of family history, and in his duty to the role of Duke which he would inherit from his dead father, John de Montfort.  Joanna is dark-haired, attractive, every inch a Navarrese and Valois princess.

I would like to think this would be a valuable image for me in bringing Joanna to life when writing about her.  But how accurate a representation is it?  There is much to intrigue the historian in this painting, and the choice that Henriette Lorimier made when deciding to portray Arthur as the young Duke.

In colouring and appearance of Joanna, we have no historical idea.  It is not on record.  We have no contemporary portraits of her.  If she is seen kneeling at her husband’s impressive tomb, it would have been after 1409, when Joanna had personally had the alabaster image sculpted in England and sent to Nantes Cathedral.  She would have been at least 40 years old.  Arthur by this time would have been 16.  Yet both mother and son look younger than this – clearly to maintain the romantic image of the young and beautiful widow and the young child with all the duty on his shoulders.  As Queen of England, Joanna never returned to Brittany to see the tomb completed, as far as the records show. 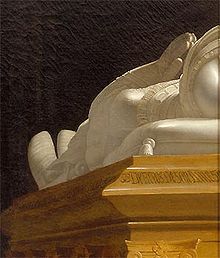 It could be argued of course that this image was from the date of Duke John’s death in November 1399, in which case Joanna was only thirty one, and Arthur was six years old, which makes the image more realistic, but still does not explain the magnificent tomb beside which she is kneeling.

Another interesting point: Arthur was not the heir to the Dukedom when John de Montfort died.  Why chose to paint this child, receiving his mother’s encouragement and instruction?  The heir was another John, the eldest son, who became John VI on the death of his father in 1399.  So why paint Arthur?

The choice of costume is also highly romantic.  Joanna is wearing a fur trimmed cote-hardie, which by 1409 would have been regarded as not the height of fashion by members of the Court.  Joanna, who was known to spend extravagantly on clothes, would have worn a houppelande with its high neckline and heavy folds, and her hair would certainly have been covered by a veil if not one of the rolled chaplets or a caul.  Arthur appears to be wearing something  romantically childlike for 1409.  I expect that the artist thought that a romantic, easily recognisable ‘medieval’ image was more important than authenticity. 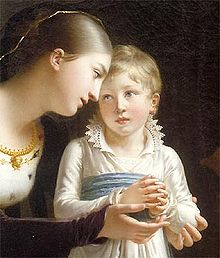 And finally, to return to why Henriette chose to paint Arthur.  He actually became Duke of Brittany but not until 1457 in the final year of his life, taking the title after his nephew Peter who died childless.  Thus Arthur was 64 years old when he became Duke.  I would suggest that he was chosen for the subject of this highly romantic picture because of the role he played in French history, where he gained something of a reputation as Constable of France, particularly fighting alongside Joan of Arc.  Arthur also played a major role in bringing peace between France and Burgundy at the Treaty of Arras.  This alliance led ultimately to the defeat of English pretensions to the French crown.  Duke Arthur commanded the French army in the Battle of Formigny in 1450 which resulted in the conquest of Normandy.  Thus Arthur was a heroic figure in French military history.  I can only presume that this was the reason for the painting in the nationalistic years of Napoleonic France. 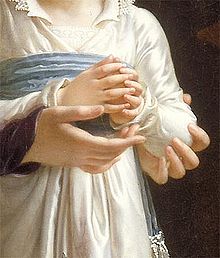 What a splendidly sentimental portrait this is.  Do the historical inaccuracies matter?

I would suggest that accuracy has no bearing on the subject, and so we must be prepared to accept dramatic license.  It was not painted to make a genuine historical comment but to heighten the emotion of the relationship between the young widowed duchess and her little son, to tug at the heart-strings of the onlooker.  It makes her an appealing figure, which is what was intended.  As long as we know the intentions of the artist, then we are able to appreciate the worth of this romantic painting.

As an interesting post script; this painting gained an immense success when it was exhibited in 1806. Empress Joséphine immediately purchased it for her paintings gallery at the Malmaison.