New Year Gift Giving in the House of Lancaster 1392

Jewels all the Way

What value do we put on a man who is more than happy to buy gifts for the members of his family?  A man generous with the amount he spends, and with exquisite taste? 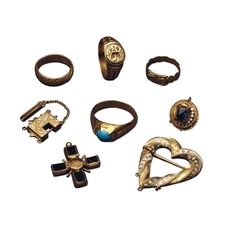 John, Duke of Lancaster and his son Henry, Earl of Derby (later to become Henry IV after the deposition of Richard II), were both open-handed and generous gift givers, and were also fairly meticulous record keepers.

My interest in this family developed through my novel of Katherine de Swynford, The Scandalous Duchess, and my present writing about Elizabeth of Lancaster, Henry’s sister.  Henry plays a major role in Elizabeth’s relationship with John Holand, Duke of Exeter.

So to return to gifts …

In the late fourteenth century, the time for exchanging gifts was New Year’s Day rather than Christmas, and the giving of gifts by an important man was more than simply a way to mark the special day.  One purpose of it was of course to bind the lucky recipient in an unbreakable bond of loyalty with the giver.  Another was to exhibit the power of the giver through the value and ostentation of the gift.  But some gifts were simply to give pleasure and show affection to a loved one.

And how open-handed Earl Henry was on New Year’s Day in 1392 when a large number of the Lancaster family had met to celebrate Christmas at Hertford, Duke John bringing his own minstrels with him to swell the musical offerings. 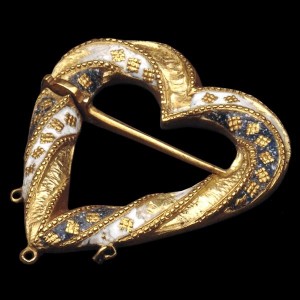 These are Henry’s gifts on record:

– To the King, Richard II, Henry’s first cousin – who was not at Hertford – a gold brooch in the style of a panther with sapphires and pearls.

– To his father the Duke of Lancaster, a gold swan with a ruby and pearls.

– To Mary, his young wife of years, a golden hind covered in white enamel with a gold collar.

– To Dame Katherine  de Swynford (not yet married to the Duke but who clearly had a very close association with the whole family and was present at Hertford) a gold ring set with a diamonds.

– To Joan Beaufort, daughter of Dame Katherine and the Duke, a pair of paternosters – rosary beads – of coral and gold.

Jewels were also given to Constanza, the Duchess of Lancaster, who was not one of the party.

Also to Eleanor, the Duchess of Gloucester, Mary’s sister.

And to Elizabeth, Countess of Huntingdon, Henry’s sister. 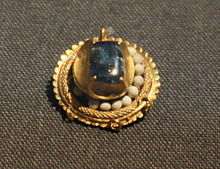 Of all these gifts, from an aesthetic point of view, the white enamelled hind is the most interesting.   The use of white enamel was rare in jewellers’ art, requiring great skill, and although there is no trace of Mary’s golden hind, we have the famous and absolutely exquisite Dunstable Swan jewel which is made in the same manner.  In the same account of these New Year’s Gifts is a reference to Henry paying Ludwing the Goldsmith for the mending and enamelling of a gold swan of his own, which he had broken.  Was this the Dunstable swan jewel?  Or something very like it?  The swan was one of the heraldic symbols of the Bohuns, Mary’s family.  It may be that the swan brooch too belonged to Henry. 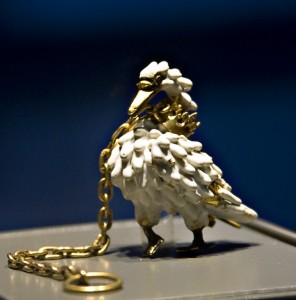 Henry continued to give generously.  In future years – such as 1393 – he ordered the making of two suits of armour which were then sent on to Hertford for himself and Thomas Beaufort, the youngest son of Katherine and Duke John.  Tournaments were part and parcel of the celebrations for this family and the new armour was to be displayed in the jousts.

In that same year, Mary and Dame Katherine were each presented with four lengths of white damask silk for gowns for the celebrations.

What a pleasure it is to see these personal touches, when much of history is taken up with politics, battles and thwarted ambitions.  How fortunate that John and Henry kept personal accounts.

The jewels I have included in this post, apart from the Dunstable Swan jewel, are part of the Fishpool Hoard, discovered in Nottingham, and thought to date from the mid 1400s, so they are roughly contemporary and give us an idea of the quality and craftsmanship in the production of such gifts.  They can all be seen in the British Museum.  The originals noted by Henry have sadly all disappeared. Perhaps they are waiting somehwere to be discovered.  How wonderful! 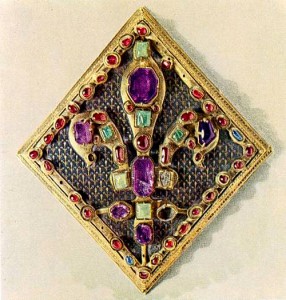 All the above characters appear in The Scandalous Duchess, my novel of Dame Katherine de Swynford.