My compulsion to write about Elizabeth of Lancaster, younger daughter of John of Gaunt and Blanche of Lancaster, was born out of my own initial ignorance about her (for which I am ashamed), followed by a visit to the Church of St Mary, a tiny rural church in the hamlet of Burford, Shropshire, close to where I live.  This is the little church, full of interesting memorials, most belonging to the Cornewall family. 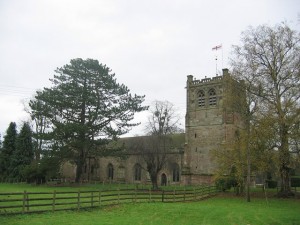 It all began when I was invited by a local historical society here in the Welsh Marches to give a talk on Elizabeth’s life together with a guided tour to her tomb for society members.  Being a recent ‘incomer’ to the area, I was forced to admit that I knew nothing about her other than her Plantagenet connections, her illustrious parentage, a sister who became Queen of Portugal, and that Katherine Swynford had been employed as her governess. Not enough for an informative or even an interesting lecture.

Some investigation and a personal visit to her tomb were essential.

And there she was at Burford, the heroine of my new novel, in vivid colour.  This tomb is very much a ‘Hereford type’, set low into a wall with a reclining figure beneath a decorative arch.  There is one for Lady Joanna de Bohun in Hereford Cathedral, and one for Blanche Mortimer in Much Marcle.  But this one immediately took my eye. 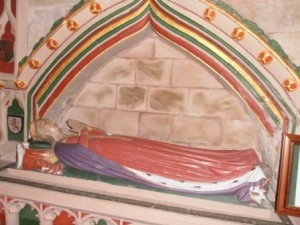 I think I knew that I must write about Elizabeth as soon as I saw her effigy.  Clad regally in red with a purple cloak trimmed with ermine, she was every inch a Plantagenet Princess (the tomb is referred to locally as the Princess tomb).  Her hair is fair, her face oval and her nose long. Plantagenet features, I suppose. She wears a ducal coronet and her hands are raised in prayer, an angel supporting her pillow and a little dog holding the edge of her cloak in its mouth.  She is quite lovely, although it has to be said that the tomb was probably repainted when it was given a Victorian overhall in the late 19th Century.  Still I imagine that it kept the original colours, and here is the inscription carved around the edge of her tomb:

Here lyeth the body of the most noble Princess Elizabeth, daughter
of John of Gaunt, Duke of Lancaster, own sister to Henry IV, wife of
John Holland, Earle of Huntingdon and Duke of Exeter, after whose
death she married John Cornewayle, Kt. of the Garter and Lord
Fanhope, and died in the 4th year of the reign of Henry VI, 1420. 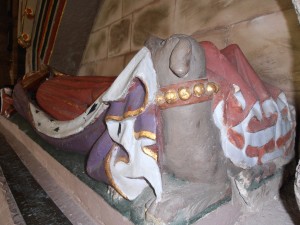 But to write about her as a heroine I needed to discover more.  And how little there was, either in contemporary sources or compiled by modern historians.  Even the Oxford Dictionary of National Biography grants her little space, and barely more than I already knew, other than that she had three husbands.  But one comment, written in 1994 intrigued me when it damned her with the only opinion given about her as ‘frankly wanton and highly sexed.’  Another historian, of higher repute, dismissed her as ‘of less serious temperament’ than her siter Philippa who became Queen of Portugal.  And yet another had little more to add about Elizabeth other than her ‘unseemly conduct’ and strong will.

Was there nothing more to say about Elizabeth of Lancaster than this, that she was a feisty women whose morality was open to question?  But where was the evidence for the rest of her life which was a long one?  Was this simply based on the fact that she had three husbands during her lifetime of fifty years.  And that John Holland, her second husband, ‘was struck down passionately, so that day and night he sought her out,’ while she was still not free to wed him.  And, furthermore that she became pregnant with his child before her first marriage was annulled.  I expect that such events had a bearing on the judgement but surely there must be more to say about this daughter of Lancaster. 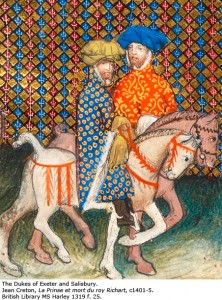 Here is John Holland, youngest son of Joan of Kent, and Elizabeth’s second husband, superbly clad in blue, not to mention the hat.  This is when he was Earl of Exeter, attempting to negotiate between Richard II and Henry Bolingbroke in the usurpation upheavals in 1399.  And here lies the exciting core of Elizabeth’s life.

All became clearer for me when I came to appreciate the political setting in which Elizabeth lived.  Her first marriage was to a child of 8 years, a political alliance, which was never consummated.  Her second marriage and her own family connections took her into the heart of the dangerous events of 1399 and 1400.  These were the years of the overthrow of King Richard II by Henry Bolingbroke, Elizabeth’s brother, who became Henry IV, followed by the Rising of the Earls in which John Holland, the Duke of Exeter, half-brother to King Richard, was majorly implicated.  Elizabeth was in the very centre of this maelstrom.  First cousin to Richard, sister to Henry, wife to John Holland, how difficult were family loyalties for her within that setting.  What would be her role in the dynamics of this vital Plantagenet family?

Here is Richard in happier days, receiving a book from the chronicler Froissart. 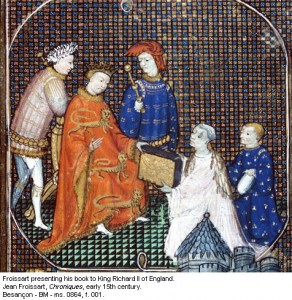 What a marvelously emotional story this would make, mapping the pressures of blood and loyalty and duty within a family torn apart by noble ambition and a wayward king.

This was to be the story of Elizabeth of Lancaster in The King’s Sister.

My thanks must go to the local historical society for highlighting my initial ignorance and presenting me with the opportunity to discover more about Elizabeth.  How much I enjoyed the experience.  I hope that you enjoy the reading of it. 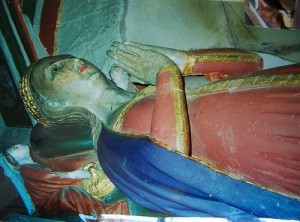