I had come across this Prophecy of the Six Kings before in my readings surrounding the Plantagenet kings, but when writing ‘The Queen’s Choice’, it suddenly became very pertinent because of its influence on the events of Henry IV’s reign.  I had to give it some serious consideration.

Where does this prophecy come from?

Its origin is shrouded in myth and legend, but all the more attractive because of this mysticism.  It was said to have been written down about 1312, at the time of the birth of Edward III.  It was certainly the most popular prophecy of the 14th century.  It was believed to be Merlin’s response to King Arthur’s question about the ultimate fate of the kingdom. Here is medieval Merlin dictating his thougths to a scribe. 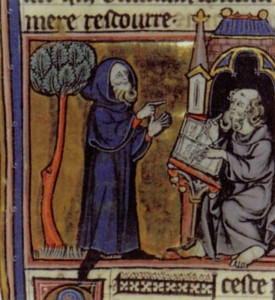 And here they are:

The six kings who would follow King John were likened, by Merlin, to six beasts.

Edward I: a dragon

And this is where my writing picked up the story within the prophecy.

As Edward III’s reign progressed, the accuracy of the prophecy became clearer in his ‘boar-like’ qualities.  The prophecy said that Spain would tremble, the boar would sharpen his teeth on the gates of Paris, the boar would regain all the lands of his ancestors, and more.  To a superstitious age, all seemed to happen as was foretold.  Spain was defeated in a naval battle at Winchelsea in 1350, Edward’s successes at Crecy and Poitiers need no further explanation, all culminating in the English achievements in regaining territory in Europe in the Treaty of Bretigny.

This is Edward in a contemporary image, showing him resplendent in his garter robes. 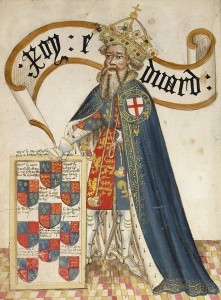 With this apparent proof in mind, many accepted Merlin’s prophecy as a framework for God’s plan for the on-going English monarchy, and because Edward III’s reign seemed to be a truth, Englishmen living in the reign of Edward might look at the rest of the prophecy with some foreboding.

The next king after Edward III would be another lamb.  Hardly the Black Prince who had shown less than lamb-like characteristics in his military career.  It would certainly be a more fitting description for Richard II, shown here in the first contemporary portrait of an English monarch with all the regal trappings, now to be seen in Westminster Abbey.

But then there was a further prophecy attached to Merlin’s foreknowledge.  Neither Edward, the Prince of Wales, nor Lionel, the Duke of Clarence, would wear the Crown of England. Ultimately the crown of England would pass to the House of Lancaster.

Was this another facet to the enmity between Richard II and Henry IV, exacerbated by these prophecies?  Richard seems to have taken them seriously.  The antagonism between the legitimate Plantagenet line and the House of Lancaster was thus in existence long before Richard and Henry Bolingbroke were born.

The sixth king after King John – this would be Henry IV, which became very relevant to me – would be the mole – a ‘moldewarp’ – and would have a rough skin like a goat.  Henry might well consider this to be true for himself, when he was struck by the severe skin complaint that troubled him through his final years.  Here is Henry in a contemporary portrait from an illuminated initial in The Great Cowcher of the House of Lancaster. 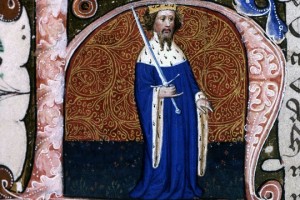 ‘A dragon shall rise up in the north which shall be full fierce and shall move war against the ‘moldewarp’ and shall give him battle upon a stone.  This dragon shall gather again into his company a wolf that shall come out of the west that shall begin war against the moldewarp on his side, and so shall the dragon and he bind their tails together.  Then shall come a lion of of Ireland that shall fall in company with them, and then shall England tremble … the moldewarp shall flee for dread and the dragon, the lion and the wolf shall drive him away … and the land shall be partitioned in three parts; to the wolf to the dragon and to to the lion, and so it shall be for evermore.’

So who were these creatures, the dragon, the lion and the wolf?

The Percy Earl of Northumberland was the dragon from the north.

Edmund Mortimer was the lion out of Ireland.  Lionel, Duke of Clarence, Edmund’s royal grandfather, had been governor of Ireland.

Owain Glyn Dwr was the wolf from the west, emerging out of Wales.

Together these three made the Tripartite Indenture, planning to oust Henry and divide England between them.

We cannot wonder that both Richard and Henry felt the heavy pressure of ancient prophecies on their shoulders.  We cannot wonder that Richard felt threatened by his cousin Henry.  In an age when rumours and portents were unpicked and seriously considered, this would have been a time of great uncertainty for a King who was regarded by many as nothing less than a usurper. 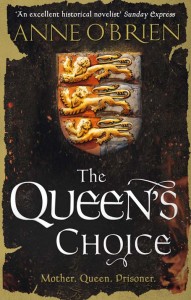