What was life like for Queen Joanna, widow of King Henry IV, imprisoned for Witchcraft in Leeds Castle?

In its beautiful setting, surrounded by water, Leeds Castle in Kent was one of our medieval Queens’ dower properties, and as such became one of Joanna of Navarre’s estates.  It was here that Joanna, when accused of ‘compassing the death and destruction of our lord the king in the most treasonable and horrible manner that could be devised’  (sorcery and necromancy), was incarcerated.  She began her years of imprisonment at Rotherhithe, a royal castle on the Thames.  From there to Pevensey, one of the castles of the man set over her to be her Governor, Sir John Pelham, but finally in 1419 she was sent to Leeds, where she remained until her ultimate release two years later in 1421.  Joanna is unique as a Queen of England imprisoned on the charge of sorcery.  But was she indeed a witch?

In all those years, Joanna was never put on trial and the detail of the accusations against her by her father confessor John Randolf, a Franciscan Friar, and two members of her household, were never made plain.  Nor was Randolf charged or punished with being complicit although he was shut up in the Tower of London.  He ultimately died in 1429 in a brawl with a mad priest.

What was Joanna’s lifestyle, as a prisoner in Leeds Castle?  We are fortunate indeed to have some of her account books from 1419 to 1421 which give us a clear indication.

What is very clear, from the detail of the income allowed to her and how she spent it, is that she was permitted a very soft imprisonment.  Here was no dungeon with deprivation.  Here was no harsh treatment for a woman accused of plotting to kill the king, under threat of punishment for treason and witchcraft.  In the initial weeks when she was taken into custody, Joanna’s possessions were confiscated and her household dismissed so that we might presume that this penury and isolation would be the order of the day.  It was not to be so.

It all makes for interesting reading.  The Royal Council, in ultimate control of Joanna in Henry V’s absence in France, made her a substantial allowance, not as great as when she was Queen, but enough to keep her in luxuries.  She was also provided with her own clerk to administer her revenue, Thomas Lilburne.  Her allowance enabled her to appoint a new household, and a very extensive one, of 19 grooms and 7 pages.

So what did she spend her money on, apart from an extensive array of servants to answer her every need?  Does not every woman have an interest in what she wears?  We have detail of fine garments and cloth and fur, of silk and fine linen from Flanders.  We have the information of black cloth and black silk loops for a gown, black satin for a cape to be trimmed with grey squirrel fur.  Also 3 dozen shoes at 6d a pair, purchased for her household.

Of a more personal nature, Joanna bought a rosary and a girdle in gold, a silver gilt ewer, a silver buckle, table-knives, a candlestick, as well as medicines from her Portuguese physician Pedro de Alcobaca with whom she was allowed to keep contact.  He had been physician to Henry IV, and the fact that she needed medicines might give some clue to her state of health.  Joanna also needed repair of a harp, a birdcage for her popinjay, the purchase of books, payments to Nicholas a minstrel, to buy rosewater and cinnamon.  Furthermore Joanna was allowed to ride beyond the immediate confines of the castle walls, using the horses of Sir John Pelham, with money to pay for the upkeep of her stables.

And then there are the needs of a large household for food and wine and fuel.  Fine wine from Gascony and the Rhine.  An array of fresh foodstuffs of meat and fish of every type.  A personal stock of aqua vitae.  A pot of green ginger.

Nor was Joanna completely isolated.  It is noted in the accounts what food was needed when the Archbishop of Canterbury came to visit.  There were frequent visits from Henry Beaufort, Bishop of Winchester and Humphrey, Duke of Gloucester, members of her adopted family.  Most interesting of all, Lord Thomas de Camoys, a friend of long-standing to both Joanna and Henry, a notable soldier who fought at Agincourt alongside Henry V, moved to live in Leeds Castle to keep her company for nine months until his death in 1421.

What can we learn from these accounts?  It would seem to be a lifestyle that would not be a burden on Joanna, but we have to understand that the charge of witchcraft hung over her through all these years.  We might have the benefit of hindsight but Joanna did not.  We know that this was a temporary incarceration and that she would be released, but Joanna would not know this.  Moreover she would be aware of the harsh punishment of her contemporaries for treason and witchcraft.  Joan of Arc was burned at the stake.  Eleanor Cobham, Duchess of Gloucester, was to be humiliated publically and imprisoned for life.  Joanna was in no position to be complacent about her own future, when freedom would not have been on her personal horizon.

Joanna was finally released in 1421.  In the weeks before his death in France, when he made provision for the government of England with a Regency for his baby son, Henry V turned his thoughts to Joanna.  Her release was ordered: ‘lest it should be a charge on our conscience.’

It is difficult to have any finer feelings towards Henry for his treatment of his mother by marriage.

Perhaps surprisingly Joanna, on her release, chose to remain in England rather than return to either Navarre or Brittany, but she did not live in Leeds Castle again, however beautiful the surroundings.  Instead she made her base at Havering-atte-Bower, another of her dower properties, where she lived in semi- retirement, enjoying occasional visits to court and the affections of the young king Henry VI who gave her gifts at Christmas, one of them a gold tablet garnished with rubies and pearls and a great sapphire.  He obviously held her in high regard.  Some of her dowry income was restored to her as well as estates, but not all that she had previously owned. 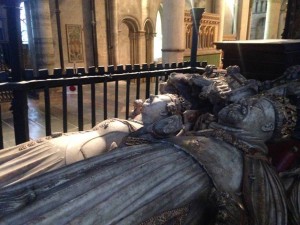 Joanna died in July of 1437 at the age of  69 years and was buried next to Henry IV in Canterbury Cathedral, unique as the Queen of England to have been imprisoned for treason by means of witchcraft.  Here on her tomb is the only image we have of her appearance, carved in marble.  A serenity that perhaps she did not enjoy in life.

So was Joanna guilty of witchcraft?  For those who have not read The Queen’s Choice, I will say no more, but it is difficult to think that the evidence points to any level of guilt.  How much did Henry V benefit from her ignominy?  It has to be said, considerably.  What an intriguing layer Joanna’s predicament added to her story.

If you would like to read more about this remarkable and strong-willed woman, here is the link for The Queen’s Choice which is on offer on Kindle for a mere £2.99 :