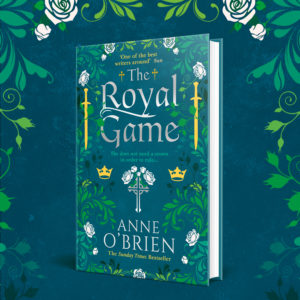 To Celebrate The Royal Game.

A Tale of Courage and Resilience.  Of Power and Danger.

The Pastons were to be found living in Norfolk in the Middle Ages. They wrote letters to each other, both the men and, even more importantly, the women. How fortunate we are that so much of this correspondence, full of detail on family dispute, of love and tragedy, as well as the minutiae of everyday life, was kept almost intact and can be read today.

The Paston women open a window for us into the life of a vibrant and ambitious family in the fifteenth century.  The Paston men are interesting characters, but it was the Paston women who intrigued me most.  What a remarkable group of women they were, living lives of success and tragedy, of love and the pain of loss.  It pleased me to allow their voices to be heard, loud and clear, from distant Norfolk.  And what better way to discover the Paston men than through the eyes of the women in their lives?

Here are the women to be enjoyed in The Royal Game:

Margaret:  the keystone, the matriarch, keeping a tight rein on husband, sons and servants, through siege, battle, legal dispute, and the essential provision of household necessities.  A woman of substance with a will of iron.

Elizabeth: Margaret’s sister in law, a sad pawn in the marriage stakes, whose search for a husband was marked with cruelty and grief at the hands of her mother.  That is until chance took a hand and dealt her some much deserved happiness.

Anne Haute: cousin of Queen Elizabeth (Elizabeth Woodville), who saw the value of becoming a Paston bride, enthralled by the ambitious and charismatic Sir John Paston.  But could she entrap his interest and win his hand in marriage? 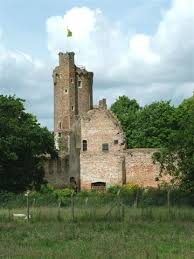 And then there are the men in the Paston story:

Clement: a bondsman of no social status who owned no land.

Justice William: his son who used the law to put the Pastons on the Norfolk map.

John, his son: who also found his metier in the law, dedicating his life to building up the Paston acres and wealth.

Elder John:  John’s son: flamboyant, ambitious, a courtier through and through, whose main youthful interest was the tournament and flirtations with attractive women at the Court of King Edward IV.

Young John: another of John’s sons. A young man who found it difficult to discover the woman he would consider taking as his wife, but when he did it was a true love match.

This is a tale of social climbing.  Of female household management, of driving ambition, of love affairs gone heartbreakingly  wrong, and marriages that became perfectly right.  Then there was the endless battle over land-ownership, to secure for the Pastons the inheritance from Sir John Fastolf, the jewel in the Paston crown, Caister Castle. 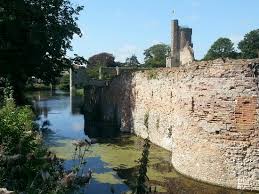 In the background, the Wars of the Roses rumbled on, where a change of King could mean success or failure for the Pastons.  They were forced to decide which side to support for their best interests, Lancaster or York.

How could I resist writing about them, a perfect example of a family on the rise?

Margaret’s comments superbly sum up her approach to life.  She was a true business woman.

‘I shall send yw money to by such stufe as I wull haue’:

The Royal Game published in hardback and in ebook September 2021.

Also available from Watersones and all good indie bookshops.

Paperback will arrive in March 2022. 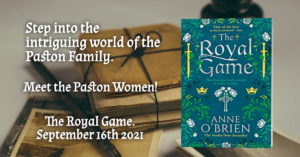