My question is, how justified in a writer of historical novels in using myth and legend as a basis for the plot?

This, the first flowering of the relationship between Katherine de Valois, Queen-Dowager of England, and Owen Tudor, is a subject that has fired my imagination over the past year when writing THE FORBIDDEN QUEEN.  It presents one of those glorious minefields for a writer of historical fiction.  We know enough about Katherine to place her firmly in a historical context, but the origins of Owen Tudor are obscure in the extreme and the manner in which the two lovers met and fell in love has been described as ‘a pot pourri of myth, romanticism, tradition and anti-Tudor propaganda.’  It is certainly a gift to writers of historical fiction – although it brings its own problems.

To start with, who was Owen ap Maredudd ap Tudor?  A genealogy chart exists for Owen, which I certainly made use of and without compunction, but it smacks of a good pinch of later pro-Tudor propaganda, and I suspect that there is really no solid evidence for his connections with a remarkable depth of Welsh nobility.  On the opposite side of the coin, Richard III stated that Owen’s father was an innkeeper in Conwy.  A claim I imagine to be equally bogus.

Owen’s early history is also open to debate and much romantic speculation from those who would wish to give him an ‘interesting’ background.  Owen, it is said, fought at Agincourt in 1415.  Owen went on a crusade to Greece.  Both again unlikely.  Perhaps with more realism it is said that in 1421 he, under the name of ‘Owen Meredith’, travelled to France in the retinue of Sir Walter Hungerford, Henry V’s steward, and this gave him his first experience of life at court.  He saw action in France and from there he progressed to some position in the royal household at Windsor.  It certainly seems a more realistic proposition.  And this of course is Windsor Castle where the love affair wiht the Queen Dowager is most likely to have blossomed. 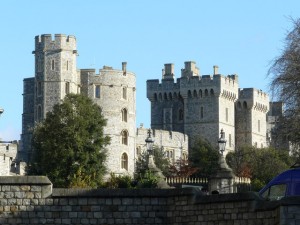 So what was his position in the royal household, and more particular, how did his path cross that of Dowager Queen Katherine?  Tradition gives us a number of possibilities, allowing him various ranks but all in the role of servitude:

– Master of the Queen’s Household

– Master of the Queen’s Wardrobe

Whatever the truth of this, we know that he was a disenfranchised Welshman, living under the restrictions placed on all Welsh by the English after the rebellion of Owain Glyn Dwr.  We must also suppose that if he became a member of Katherine’s household at some point shortly after Henry V’s death in 1422, then she must have known him for some years before she is recorded as falling in love with him around 1429 after the debacle of her flirtation with Edmund Beaufort.  The blossoming of their passion is unlikely to have been before 1429 if her emotions until that time were engaged with the ambitious Edmund.

It was, without doubt, an extraordinary liaison, for the Queen-Dowager of England, a Valois princess, to wed a man from her household.  Not even the date of their marriage is on record but it is thought to be around 1430, before the birth of their eldest son Edmund in 1431.  The occasion of their falling in love is again a mix of myth and romantic legend, and deliciously scandalous, most likely occurring at Windsor where Katherine was by law made to live in the household of her son, the young king Henry VI.

One strong tradition, written in a poem in 1461 at the time of Owen’s death, was that Owen first caught Katherine’s attention when he over-balanced and fell into her lap at a Court ball.  Too much alcohol?  Or clumsy dancing?  Impossible to tell.

A mid 16th century chronicler tells a quite different story.  Katherine saw Owen and his friends swimming in the river on a summer’s day.  Perhaps in this very spot in the Thames near to Windsor Castle. 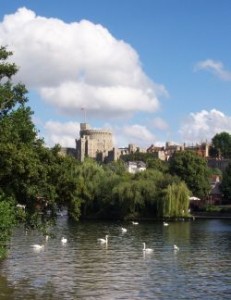 Overcome by his sheer masculinity, Katherine changed garments with her maid and arranged to meet Owen in disguise.  He was too ardent, mistaking her status: she struggled and, escaping his embrace, received a wound to her cheek. Serving her at supper that night, Owen saw the bruise and realised who the ‘maidservant’ had been.  Ashamed, he begged her forgiveness.  Katherine forgave him readily, they professed their love and were duly married.

Sadly, there is no historical proof for either version.  But what vivid scenes these traditional tales paint for us.  The difficulty for a novelist is of course producing something half-way realistic.  If Owen was Katherine’s personal servant, how could he not recognise her face, her voice, even in disguise?  Unless she was mute and they met in a dark cupboard, it would seem improbable.  As for the drunken debauchery …  It makes writing a credible version highly entertaining.  But whatever the circumstances, fall in love they did, and risked the weight of the law to marry.  As a novelist I chose the aspects that seemed to fit my characters, and since there is no evidence to prove me right or wrong, I am free to make use of the traditions.

Whatever the truth of their meeting, their love was strong enough to encourage the unlikely pair to flout the law of the land.  Katharine was forbidden to marry without the permission of the King who was not yet ten years old, whilst any man foolish enough to wed her without permission would find all his lands and possessions declared forfeit.  Most of their short married life was lived at Katherine’s dower properties of Hertford and Leeds Castle.  They lived quietly, out of the public eye.

This, the gatehouse, is all that remains of the Castle at Hertford which was probably Katherine’s favourite property. 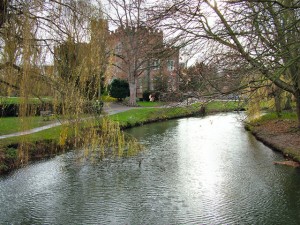 There was never any doubt that the marriage of Katherine and Owen was legal and their children legitimate.  We are on firmer footing here.  Even those who might have found it of an advantage to prove that the Tudor line came from illegitimate stock never did so.  Whatever the opposition to Henry VII, it was not voiced that his father, Edmund Tudor, was illegitimate or born outside wedlock.

I thoroughly enjoyed making the best of these romantic legends and would wish Katherine and Owen well in their love, particularly in the beautiful setting of Leeds Castle.  Sadly it was of short duration, Katherine dying in January of 1437. 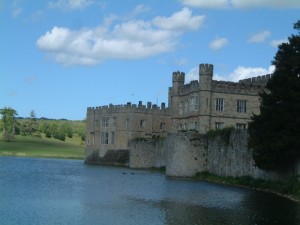 So finally, to return to my original question, should I have stuck to the truth, the whole truith and nothing but the truth?  In all honesty, without the use of the romantic legends surrounding Katherine and Owen, there would be very little to write about.  Who is to know what is truth and what is myth?  And without evidence, I feel justified in making use of what is long-held tradition.

I rest my case.