In The Queen’s Rival I make frequent use of the idea of the Wheel of Fortune in the history of Cecily Neville and the House of York. 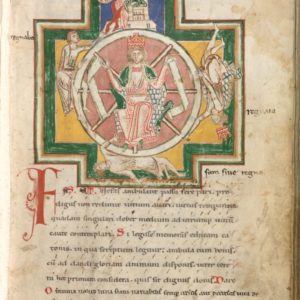 Where did this idea originate?

In the Ancient World, the Greeks and Romans found the idea of events happening without some guiding hand unacceptable.  It was far easier to blame all disasters and malicious happenings on the gods and goddesses.  The Greeks believed in The Three Fates.  These three sisters controlled life from birth to death.  Clotho, spun the threads of life. Lachesis measured the length of the thread with her rod. Finally Atropos decided on the length of life; with her shears she cut the thread and that life ended. 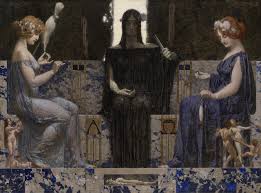 What an uncomfortable thought.

In Roman times it was thought that the ebbs and flows of life were dictated by the Rota Fortunae, the Wheel of Fortune, which was guided by the Roman goddess Fortuna.  She turned the wheel which dictated the length of life to be lived, and its quality.  It was Fortuna who became most popular in medieval times to explain the ups and downs of life. 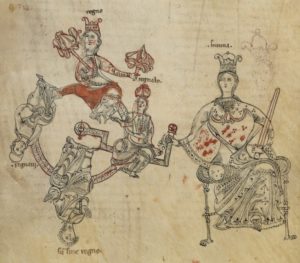 This image of Fortuna and her wheel would remind the viewer of the fragility of power.  Even at the highest levels of society, fortunes could rise and fall at a moment’s notice.  Fortuna is shown  with her hand on a lever, turning a mechanical wheel to dictate the future of four figures.  Often in the illustrations a crowned king is shown sitting  at the top of a golden wheel, only to be toppled to the gutter as the wheel turns, reaching the bottom where he no longer has power.  But as the wheel continues to turn he can equally be restored. 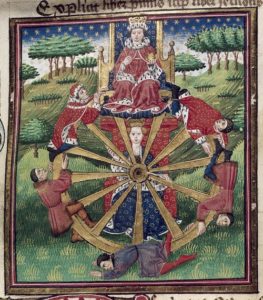 What a fitting metaphor this is for the shifting fortunes of the Lancastrian and Yorkist kings during the Wars of the Roses.  The Duke of York, once Lord Protector for Henry VI and acclaimed the new heir in the Act of Accord, met his death on the battlefield at Wakefield, his family exiled and attainted.  Thus the House of York toppled.  They were to rise again, when Edward IV was crowned King, although even within his reign there were times when Fortuna seemed set against him and.  With the Earl of Warwick increasingly in opposition to Edward, his crown wobbled on a knife edge.

King Henry IV was restored at the Readeption. Yet Fortuna seemed to smile once more on York when Richard III was crowned King, only for fate to take a hand again at the Battle of Bosworth.  For King Henry VI, the Wheel of Fortune was a permanent fall from power for the Lancastrians with his death in the Tower of London, and that of his son at Tewkesbury.  Fortuna was very busy during these years. 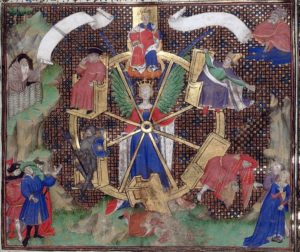 This idea of the Wheel of Fortune was used widely in the writings of the Middle Ages: in Chaucer, in Dante’s Inferno, in the Romance of the Rose.  Fortuna was also in the Carmina Burana, a collection of poems and texts from the 12th-13th centuries:

The wheel of Fortune turns;

I go down, demeaned;

another is raised up;

far too high up

sits the king at the summit –

Cecily Neville would have been very familiar with the Wheel of Fortune.