Welcome to my new blog.

Some of my thoughts on my writing about Cecily Neville in The Queen’s Rival, and my answers to some questions that I am sure will be asked.

Cecily Neville, Duchess of York, is one of the most appealing women of English medieval history.  How could I not choose to write about her, despite the obvious challenge?  The Wars of the Roses are both vast in scope and complex in the range of family connections.  So was Cecily’s family.  It was a challenge that lured me. 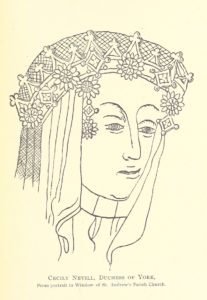 This is thought to be an image of Cecily from a fragment of a stained-glass window in Penrith.  It may not be accurately labelled but it is an attractive image.

Without doubt Cecily was a formidable woman, living for eighty years through five reigns, interacting with such a dramatis personae of famous, infamous, and influential characters in the tumultuous years of the Wars of the Roses.  She was mother of two kings and  grand-mother to a Queen Consort.  Cecily demanded to be allowed to speak out for herself, throughout all the triumph and tragedy for the House of York.

But where to start and where to finish?

Some hard decisions had to be made, based on Cecily’s direct involvement in the events and their consequences.  Thus The Queen’s Rival begins in  1459 in Ludlow, Cecily facing a leaderless Lancastrian army intent on plundering the town.  It is at Ludlow that Cecily first takes centre stage.  Abandoned by her husband, alone with her youngest children, she is left to face the howling mob in Ludlow market place.  The perfect occasion to launch her story.

Cecily with her sisters and her mother Joan, Countess of Westmorland.  Cecily is probably the figure directly behind her mother as she was the first in rank of her sisters.  Quite a family since she had a handful of brothers also.  Cecily was the youngest.

I chose to end The Queen’s Rival with the coronation of King Richard III.  After that her role became more onlooker than participant.  It was quite deliberate to omit the Princes in the Tower and the death of Richard III at Bosworth.  These are heavy subjects and would draw attention away from the main purpose of this novel.  Cecily’s acceptance of Richard’s claim to the throne provided a natural ending.

There are some characters who, although essential to the outcome of the Wars of the Roses, had little direct impact on Cecily’s life during these years.  I had also to consider the length of the novel (and so did my publishers!).  With apologies to all who would have liked more than a mention for Margaret Beaufort and Henry Tudor.  I was not unaware of them, but these people are for another time and place.  In The Queen’s Rival  they are dispatched to the periphery.

Cecily also had more brothers and sisters than I allowed to be a part of this.  Again they would detract from Cecily’s story and they would not have a part to play.  Therefore I concentrated on her brother Richard, Earl of Salisbury, and her two sisters Katherine and Anne. 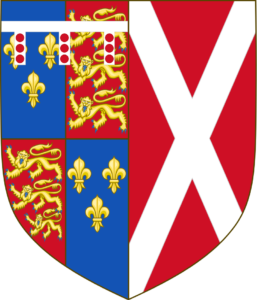 The arms of Cecily Neville, Duchess of York.

I also acknowledge that the name Wars of the Roses is not contemporary with the events, nor were the emblems of white and red roses widely used.  They are however evocative names and symbols and I make no apology in using them.

How to prevent the politics of the Wars of the Roses from taking over Cecily’s story?  I had to keep these thoughts clear in my mind as I wrote: what do we know about Cecily’s character?   What would Cecily think of this?  What would she do?  What would she say?  I must listen to her.  We have to see the events through Cecily’s eyes and emotions.  It is her story and her drama.  And this is the hard part, writing today about a woman who lived 600 years ago.  Duty and conscience and religion mattered enormously.  I could not allow Cecily to be careless and selfish.  She must live by the mores of her time in history. 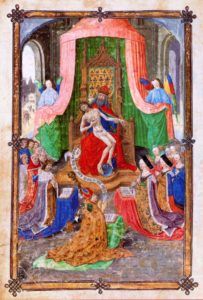 Cecily at prayer, kneeling directly behind Queen Elizabeth (Woodville) with similar headgear.  She has the royal coat of arms on her cloak.

Why did I chose to write some of the novel in the form of letters?  This is a story about family, as well as ambition and power. What better way to investigate Cecily’s relationships with her children and sisters?  I also wanted to spy on their opinions of Cecily!

What was it like to live with Cecily for more than a year?  Even when I switched off from writing for the day, when I cooked a meal, sat with music and a glass of wine and talked to my husband, she tended to creep up on me and refuse to let me leave her behind.  A snatch of conversation.  An idea.  A new scene.  A firmly expressed opinion.  I have learned to keep a notebook and pen handy!

Cecily, Duchess of York, was the doyenne of  late medieval history.  What a marvellous life she led through the whole span of the 15th century, the Queen who was never crowned.  Cecily is not exactly one of the ‘forgotten women of medieval history’, but she insisted that I write about her.  And rightly so.  I thoroughly enjoyed the writing.

The Queen’s Rival is published in hardback and ebook on 3rd September 2020.